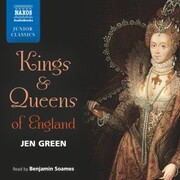 Hörbuch-Download
Which king liked to bathe while the band played Rule Britannia? Which queen was so fat she needed a hoist to get on the throne? Which prince shut his wife out of Westminster Abbey to prevent her from being crowned? Who was the blood-thirstiest monarch of them all? Kings and Queens of England is a no-holds-barred account of the British monarchy with the gossip and gore left in, and nothing left out! It leaves no stone unturned in its mission to portray kings and queens as they really were, warts and all.